This post was inspired by, and is in honour of, my translators into Spanish and Brazilian Portuguese (neither of whom, as far as I know, have Irish ancestry). [Edit 7/9/2015: I stand corrected. “Dowling” is an anglicised version of a couple of different Irish surnames.]

Most Irish emigration has been to the countries that had been, or still were, part of the British Empire, but did you know that the navies of no less than four Latin American countries were founded by Irishmen?[1]

The first documented Irish voyagers to South America were two brothers named Farrel. They landed with Pedro de Mendoza in the Río de la Plata (River Plate) region in 1536. The group of colonists of which they were part founded the city that became Buenos Aires.

The early Irish presence in Latin America arose because of links between the Irish and the peoples of the Iberian peninsula. Understandably, religion played an important role, though it was not only Irish missionaries, priests and nuns who went to Latin America. Others went as merchants, farmers and other types of workers. 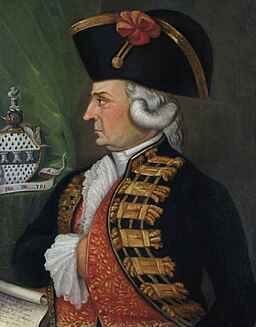 Many of the earliest Irish adventurers went to the Americas in the employ of the Catholic powers of Europe. One notable example was Don Ambrosio O’Higgins (c. 1720–1801). Born plain Ambrose Higgins in County Sligo, he was sent to Spain by his uncle, from where he went to South America. He enrolled as a military commander and administrator and worked his way up to be, first, governor of Chile (1777–95) and then viceroy of Peru (1795–1801). He was an enlightened and reforming ruler who promoted development of the colonies he oversaw.

His illegitimate son Bernardo O’Higgins is famous across Latin America as the father of Chilean independence and is interesting enough to warrant a blog post of his own, so I’ll pass over him for now.

One fascinating “What-if” story concerns the plan of a Father Eugene McNamara of County Clare to start a colony called ‘New Ireland’ in California in the 1840s. His projected settlement had the approval of the Mexican authorities, who at the time controlled not just California but New Mexico, Arizona, Nevada and parts of Colorado and Texas.

However, Father McNamara’s plans were brought to nothing by the USA, who disputed control over these territories and in 1846 went to war with Mexico over them. The Mexican-American War lasted from 1846 to 1848, and was notable for the number of Irishmen fighting on both sides.

At the time, the US army was an incredible 25% Irish-born. The US at the time, especially its ruling elite, still conformed to the WASP (White Anglo-Saxon Protestant) model, whereas the Mexicans were Catholics. Moved by this and the dubious justifications of the US’s belligerence, about 200 men deserted and joined the Mexican army. They were mostly of Irish origin and so their battalion became known as the ‘San Patricios’, after St Patrick.

Many of those caught were executed as a penalty for desertion. A plaque in Mexico City commemorates them as martyrs for Mexico.

The most important country for Irish immigrants in Latin America was Argentina. Emigrants from Ireland started arriving in significant numbers in the late eighteenth century. They were often members of farming families who had few prospects of getting land to farm at home (perhaps because they were younger sons). Interestingly, those who went to Argentina did not come from all over Ireland but were overwhelmingly from the Irish Midlands (Westmeath, Longford and Offaly) and from Co. Wexford. Scholars who study immigration patterns have noted this phenomenon in other locations too: in a self-reinforcing process, emigrants headed for areas in which they knew there were already fellow countrymen (perhaps even friends or relatives). They mostly worked in cattle and sheep farming, which they already had experience of at home. Those who came first were able to make the most of the opportunities they found and some made large fortunes. Later arrivals, no doubt spurred on by such tales of success, usually found they had missed out on the best chances, though jobs were still available.

Estimates of the number of Irish men, women and children who came to Argentina vary so widely that they seem more like guesses. Several sources I consulted give a figure in the region of 10,500 in the nineteenth century (which was the period in which most Irish immigration to Argentina occurred) but other estimates go much higher – even up to 40–45,000. Calculations are made even more complicated by the fact that many people re-emigrated when they found that reality did not match up to what they had been led to expect.

The Scandal of the “Dresden Affair”

If the first Irish to arrive in Argentina had had all the luck, the last had none at all, and to make it even more bitter, they had been enticed there with all kinds of false promises.

In the 1880s the Argentine government launched a scheme to encourage immigration from Ireland, offering pre-paid passages to successful applicants. They employed two agents in Ireland, John Stephen Dillon and H. Buckley O’Meara, to find suitable and willing emigrants.

Dillon and O’Meara were on commission and employed every kind of trick imaginable to fill their quota. They promised potential applicants all kinds of incentives – land, cattle, financial support – that the Argentinian government had never intended to make available and rather than just recruiting the young and able-bodied, they filled a chartered ship, the ‘City of Dresden’, with anyone they could persuade to come – there were even octogenarians on board!

When the 1,100 hapless emigrants arrived in Buenos Aires, they found themselves entirely abandoned. The Argentinian authorities did as good as nothing to help. Charity efforts were organised, especially by the already settled British and Irish communities in Buenos Aires, but for every one immigrant aided several were exploited by unscrupulous employers or left to fend for themselves. Some travelled hundreds of miles, having been promised work, only to arrive and find nothing. Hundreds starved in destitution.

The crisis was made worse by the fact that at that time Argentina was receiving more immigrants than it could handle. On the same day that the ‘City of Dresden’ docked, another ship, the ‘Duchesa di Genova’, arrived with a thousand Italians on board, who had the advantage over the Irish of speaking a language closely related to Spanish.

It was a huge scandal that reverberated all the way back to Ireland. The Archbishop of Cashel, T.W. Croke, wrote to The Freeman’s Journal, roundly abusing the Argentinians as scoundrels and imploring “my poorer countrymen, as they value their happiness hereafter, never to set foot on the Argentine Republic however tempted to do so they may be by offers of a passage or an assurance of comfortable homes”.

The bad publicity generated by the Dresden affair effectively put an end to large-scale Irish immigration to Argentina.

The Irish in Argentina today

Consciousness of Irish heritage is much weaker in general than it is in the USA (for example), so there are probably thousands of Latin Americans unaware that they have Irish ancestors. As has been noted, it’s hard to arrive at definite figures, but the best estimates say that 300,000–500,000 of the people living in Argentina today (out of a total of 40 million+) have an an Irish background. That’s more than live in the rest of Latin America put together.

The Irish and Latin America by Bruce Gaston