John Bulmer Hobson was born on 14 January 1883 in Belfast and died on 8 August 1969 in Castleconnell, County Limerick.

Unusually for an Irish revolutionary he actually came from a Protestant family. His family were Quakers, which is a pacifist Protestant sect. Although his father was a supporter of Gladstone’s Home Rule plans, his mother was English and therefore it’s perhaps surprising that he became so passionate about Irish culture and the cause of Irish freedom to the extent that he was once described by British intelligence as:

“The most dangerous man in Ireland”

Bulmer Hobson was seemingly turned on to Irish culture by the Ulster-born poet and writer Alice Milligan, who was behind The Shan Van Vocht, a monthly literary magazine published in Belfast from 1896 to 1899, and who knew the Bulmer Hobsons. John Bulmer Hobson was very energetic and got involved in a lot of different activities when he was still young. He was a member of the GAA (Gaelic Athletics Association) and also the Gaelic League; he helped to found the Ulster Literary Theatre, which was set up in 1902 to try to bring Irish themes into the theatre in Belfast on the model of what was being done in Dublin by Lady Gregory and W.B.Yeats; in 1905 he founded the Dungannon Clubs, which were nonsectarian organisations whose members dedicated themselves to the cause of an Irish Republic. The Dungannon Clubs took their name from the United Irishmen’s Dungannon Conventions of 1782; it’s not surprising that Bulmer Hobson was drawn to the more secular Irish nationalism of Wolfe Tone than other more Catholic versions. Nonetheless, he also joined the Irish Republican Brotherhood in 1904 as one of a number of young members who helped to revitalise what by this stage had become a rather moribund organisation. 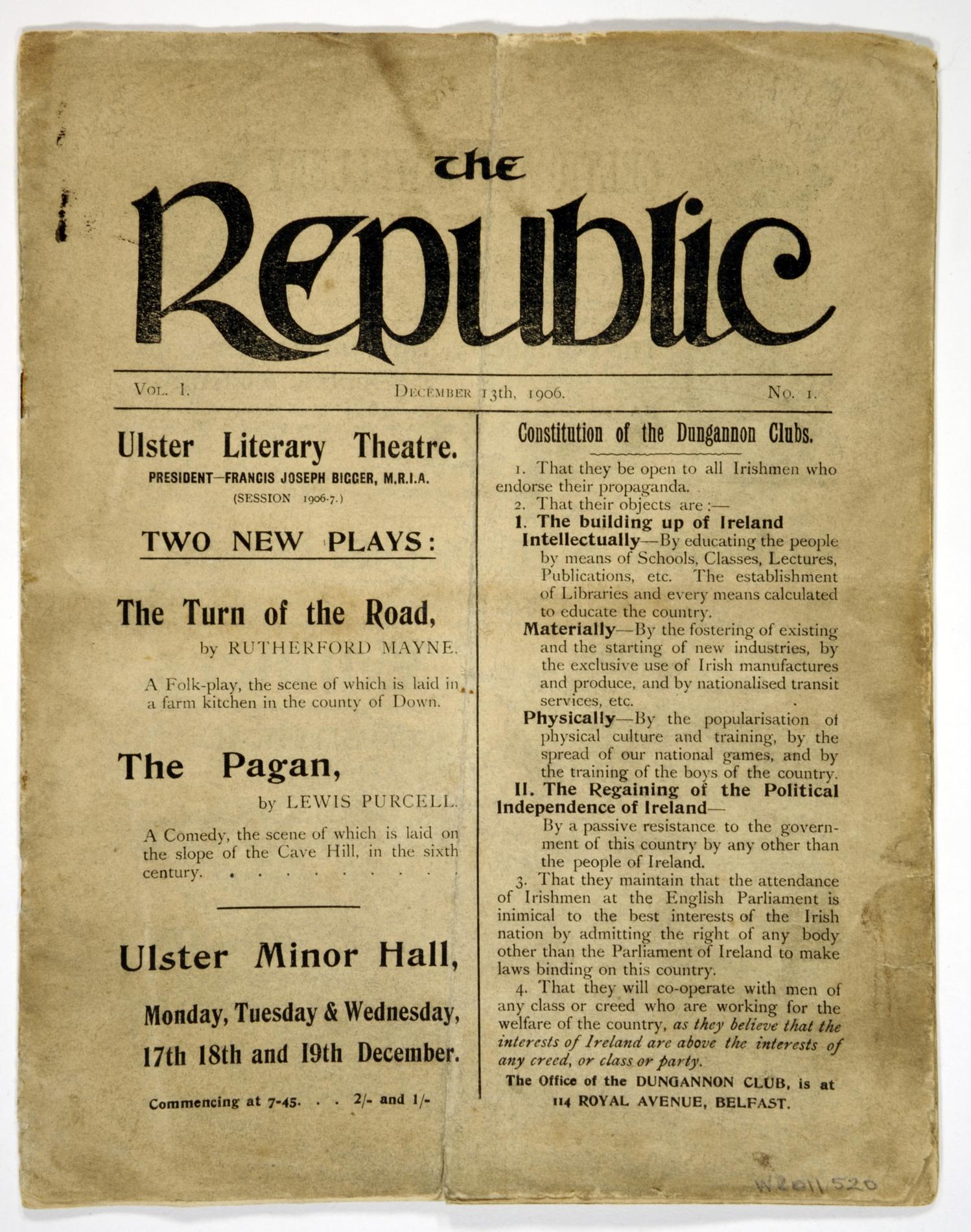 All through the first decade of the 20th century he also engaged in journalistic activities. He wrote for, founded or co-founded a number of different newspapers and magazines, most famously The Republic, which published the manifesto for Dungannon Clubs.

He also went on speaking tours, for example to the United States, to raise awareness of and gain support for his cause. Later on (1909) he helped to found Na Fianna Éireann, which was an Irish equivalent of the Boy Scout movement (the Scouting movement being something very connected to the British Empire and therefore anathema to Irish nationalists). Finally, in 1913 he was one of those who helped to set up the Irish Volunteers and he also in part organised the gun-running episode at Howth which brought in rifles to arm the Irish Volunteers. (Around this time he left the Quakers, judging continued affiliation to be inconsistent with his support for a paramilitary organisation.)

Despite all of this energetic nationalist activity he became a controversial figure for a couple of reasons. Firstly, when John Redmond realised how powerful and important the Irish Volunteers were becoming he demanded that he and his supporters should be given control over them. Bulmer Hobson was one of the people on the controlling board of the IVF and agreed to Redmond’s demand because he was worried that if he didn’t there would be a split. (Of course, with the benefit of hindsight we know there was a split anyway.) Bulmer Hobson was on the receiving end of a lot of criticism for this decision and therefore he was kept completely in the dark about the plans for the Easter Rising despite his position in the Volunteers and in the IRB. He nevertheless suspected something was going on and was passing on information about his suspicions to Eoin MacNeill, who – as is well known – tried to stop the Rising by sending out countermanding orders to the IVF telling them not to assemble at Easter. In fact, to prevent Bulmer Hobson sabotaging the Rising members of the IRB kidnapped him before it began and held him prisoner for a couple of days so that he couldn’t speak out against it or try to stop it happening.

After that Bulmer Hobson basically dropped out of history. During the Easter Rising he went into hiding rather than joining in anyway (as did, for example, The O’Rahilly), for which he was criticised by some former colleagues. He didn’t get involved in anything that happened after that in terms of Irish republican activities: he didn’t participate in the War of Independence and he stayed out of the Civil War. In the 1920s he became a civil servant working for the Irish government. At the same time he went on writing books. He became very interested in economics because he thought if Ireland could be improved economically then one of the main arguments of the Unionists against Irish independence would be dealt with. Insomuch he remained a ‘northerner’; he was very concerned with the fact that partition had happened and one of his main interests in later life was how this could be reversed.

If you want to know more about Bulmer Hobson here are two links. One is to quite a long article on his later life which is free to download. In addition, he was interviewed by Irish television in the 1960s about his role and you can see a clip of that on the RTÉ website.

A Short Biography of John Bulmer Hobson by Bruce Gaston