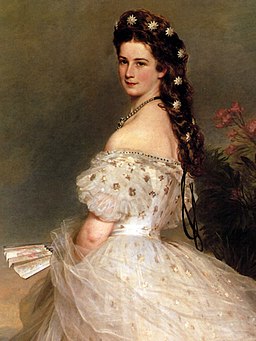 This is actually from a call for papers for an academic conference on Austrian travel writing, but I found it pretty funny:

On 24 February 1879, Empress Elizabeth of Austria (‘Sisi’), participating in a stag hunt out of Summerhill House, residence of the Viscounts of Langfort in Kilcock, County Meath, breached the walls of neighbouring St. Patrick’s College Maynooth. She was greeted by Acting President, Dr William Walsh, a future Archbishop of Dublin. On returning to Ireland one year later, she presented the College with a statue of St George, somewhat unfortunately the patron saint of England. Sisi’s visit – after all the visit of a Catholic monarch from a ‘dual’ monarchy – was widely welcomed by Irish nationalists as a potent statement of solidarity. The empress, perhaps contritely, later endowed the College with a set of vestments of gold cloth, decorated with gold and green shamrocks and the coats of arms of Austria, Hungary and Bavaria. The less welcome statue was promptly stolen.

Sisi was an A-list celebrity in the 19th century (and beyond: her image is on all sorts of tourist tat in Vienna). I knew that she travelled a great deal but I had no idea she’d been in Ireland. This is worth investigating, I think…