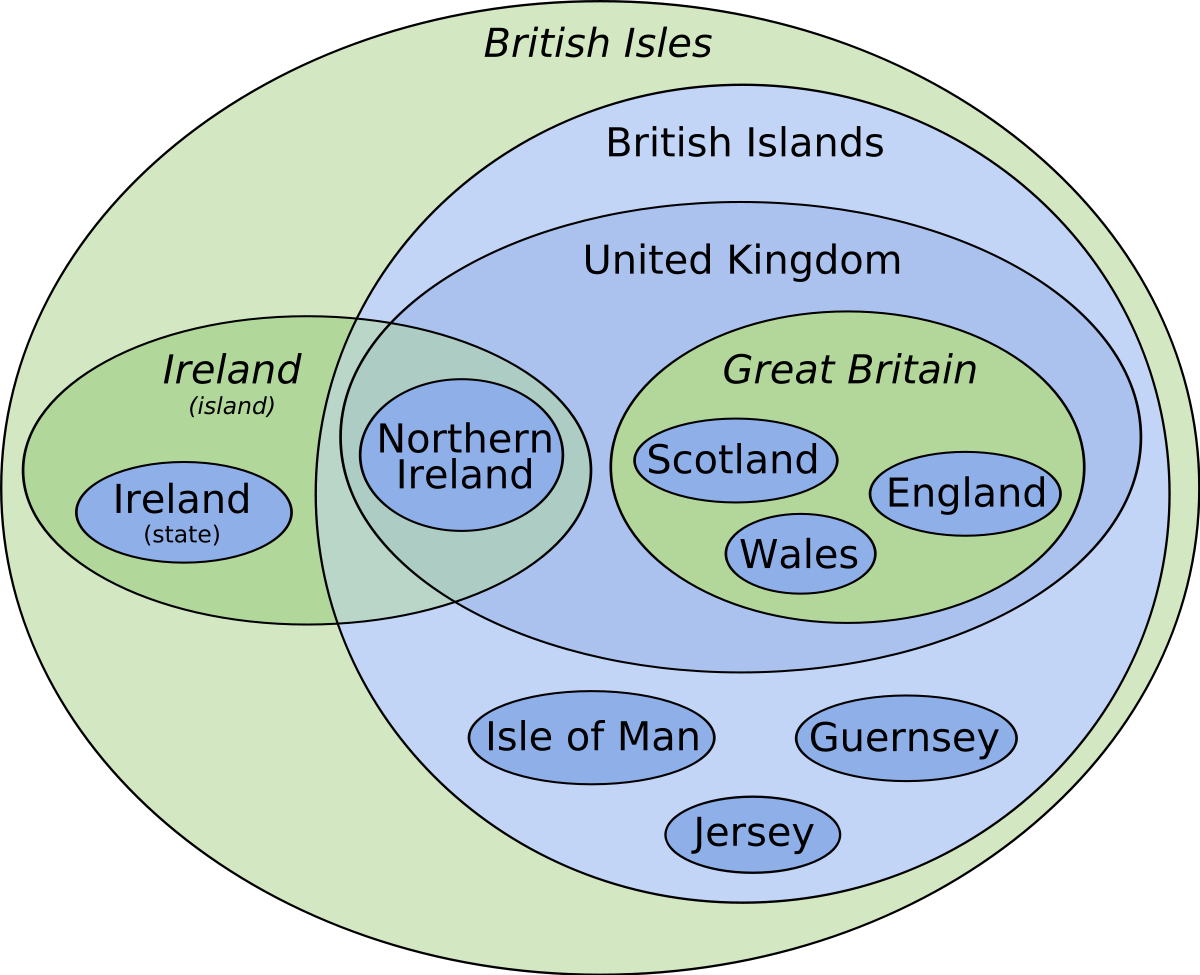 Some years ago I created the following guide to the minefield of names for the constituent parts of the, err, am I allowed to say “British Isles”? I thought I’d post it here as well for the benefit of a wider public.

Placenames in Britain and Ireland: a glossary

Éire
The Irish (Gaelic) name for Ireland. Sometimes used (particularly by foreigners) to mean the political entity of the Republic of Ireland (see below).
Erin
Poetic name for Ireland.
Ireland
Geographically, the whole island; sometimes, the Republic of Ireland.
Southern Ireland
The name for the southern part of the island immediately after Partition and until 1921; still used at times in Northern Ireland.
Northern Ireland
The name for the northern part of the island after Partition; still used today officially and by Unionists. Nationalists prefer “the north of Ireland” and Republicans “The Six Counties” (or even more radically “The Occupied Counties/Occupied Ireland”).
The Free State
The name for the semi-independent southern part 1921–1937. In Irish, Saorstát Éireann. Used derogatively for a long time after by hardline Republicans. See note at “Republic of Ireland”.
The Six Counties
Republican term for Northern Ireland.
The Twenty-Six Counties
Republican term for the Republic of Ireland.
Ulster
The northernmost of the four provinces of Ireland, comprising counties Antrim, Down, Armagh, Fermanagh, Tyrone, Londonderry (modern Northern Ireland), and Donegal, Cavan, Monaghan (in the Republic). Often used to mean Northern Ireland (e.g. in the term “Ulster Unionist”).
The north (of Ireland)
See “Northern Ireland”
The south (of Ireland)
Sometimes used in the north to refer to the Republic.
The Republic of Ireland
The 1937 Constitution did away with the term “Free State”. According to it, “The name of the State is Éire, or, in the English language, Ireland.” However, this led to a possible confusion between the island and the state established in the twenty-six counties, at least until a republic was declared in 1948. Although the name as given in the constitution was not changed, the term “Republic of Ireland” came to have legal validity and entered more common usage.
England
Is only part of Britain/Great Britain/the United Kingdom (see below); the Northern Irish (like the Scots and the Welsh) get very annoyed when people use “England” to refer to the whole of the UK.
Britain
Derives from Britannia, the Latin name for the larger of the two islands. Used as an informal name for Great Britain or even the UK (see below).
Great Britain
England, Scotland and Wales. (Confusingly, the adjective “British” includes the Northern Irish, although they do not actually live in a part of Britain.)
The United Kingdom
Full name: The United Kingdom of Great Britain and Northern Ireland.
The British Isles
The two large islands off the coast of mainland Europe, plus all their smaller islands (Isle of Man, Hebrides, Shetlands etc.). The term is disliked by some Irish nationalists because of the use of the word “British” to include the independent state of Ireland.
West Britain
No longer used as geographical term, but the derivation “West Briton” is an abusive term applied by Republicans to any pro-British inhabitants of Ireland (esp. the Unionist Northern Irish).

← Was Patrick Pearse bad at maths, or at history, or at both (or at neither)???
An answer to my question? →