This post was originally written on Quora in answer to the question: “Irish History: What was the ‘Flight of the Earls’, and why was it important?” This is my response:

It probably matters most because of what it symbolised.

The northern part of Ireland, where the earls in question came from, was the part that resisted for longest English attempts to control the island. There were a few small outposts, such as the town of Carrickfergus, whose town walls and dominating castle (see picture) indicate how tenuous the English hold was on this area.

In the medieval period, English rule was centred on the area around Dublin (this area was called ‘the Pale’, and gives us the expression “beyond the pale”, meaning beyond civilised behaviour). It slowly expanded out from this base over the next few hundred years. The extension of English rule was partly brought about militarily, partly by encouraging native leaders to acknowledge the English monarch as their superior, and partly by a process of immigration and colonisation. The north-eastern part of the island was geographically the most remote part, and thus remained unaffected by this process longest – politically and culturally.

In England, there had been a drive for hundreds of years towards a unitary state. Ireland was different: ever since Celtic times, local kings and chieftains more or less enjoyed autonomy within the areas they controlled, and these areas altered according to shifting power relationships. (“Ireland” at this stage should be understood as a geographical description rather than as the name of a polity or state.) It was the interference with their powers and the threat to their right to act as they thought fit (including their right to go to war with their neighbours!) that the Irish chieftains and lords resented, and it led to a number of rebellions, of which one of the largest (and for our inquiry the most important) was the Nine Years War (1594-1603).

The Nine Years War was fought largely in Ulster (the northernmost province of Ireland, which today encompasses the counties of Antrim, Armagh, Down, Fermanagh, Londonderry, Tyrone, Cavan, Donegal and Monaghan) by Hugh O’Neill of Tír Eoghain (Tyrone), Hugh Roe O’Donnell of Tír Chonaill (Tyrconnell) and their allies against the forces of Queen Elizabeth I. The Ulster Earls were, like most native Irish, Catholic. They were also Irish speakers and the society they lived in was still determined by the old Celtic laws and customs. By this time English rule was in effect across the rest of Ireland, so the war can be viewed as a last ditch attempt to prevent total English domination. 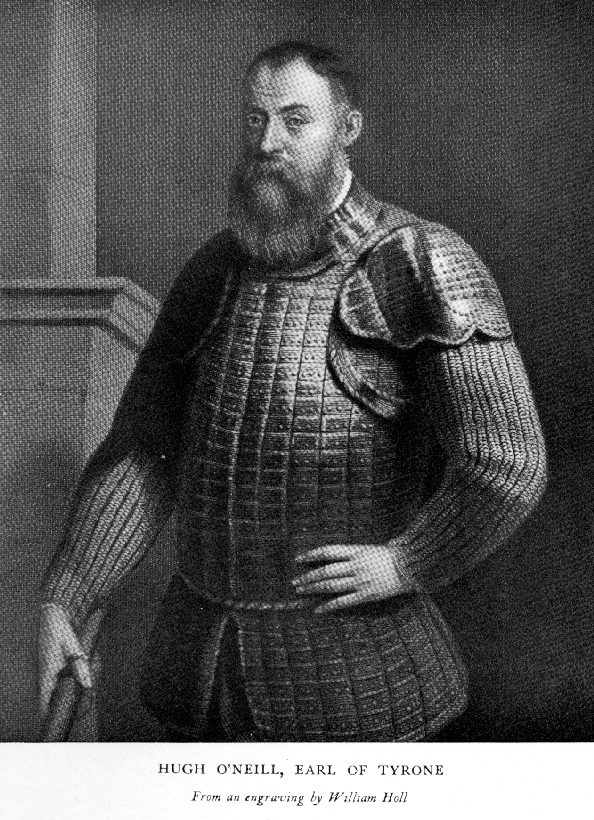 Despite assistance from the Spanish, the rebellion was ultimately unsuccessful, although, ironically, Elizabeth died a week before Hugh O’Neill surrendered. He was the last to give in. Nine years of war had left the province devastated.

The new king was James VI of Scotland, who became James I. He adopted a policy of reconciliation on condition of allegiance and pardoned the Irish chieftains. Nevertheless, they were forced to accept that the lands they held were not theirs but dependent on the king’s favour. O’Neill lost a substantial amount of territory.

As far as the British authorities were concerned, the loyalty of the Earls of Tyrone and Tyrconnell and their associates remained suspect: had they really been subdued or were they just biding their time and rebuilding their strength prior to another armed uprising? The Gunpowder Plot of 1605 further increased the Crown’s distrust towards Catholics.

So, the Earls had a number of worries: they had just lost a war, and with it a substantial amount of status and territory; they felt their way of life under threat from an alien culture; and they were uncertain of how far they could trust King James.

It was a dispute over land that brought matters to a head. O’Neill was not willing to acquiesce in the granting of some of his former territories to other tribes by Sir Arthur Chichester (the King’s ‘man in Ireland’, as it were). O’Neill was invited to London in 1607 to settle the argument before the King.

Instead, O’Neill chose to flee to the continent. He was accompanied by Rory O’Donnell (brother of Hugh O’Donnell, who had died in 1602) and other Ulster Earls with their families and entourage. They left from Rathmullan in County Donegal, sailing down Lough Swilly and then to France. They then moved on to Flanders (which at the time was controlled by Spain) and then to Italy.

In all likelihood they planned to seek refuge and support in these Catholic countries, in order to later return to Ireland with sufficient military or diplomatic backing to enforce their claims against the English monarch.

It was not to be. Spain (which had famously and disastrously tried to invade England in Elizabeth’s time) was no longer prepared to launch military ventures against Britain. The Earls’ land in Ulster was confiscated by the Crown and given to English and Scottish landlords who were charged with bringing over loyal settlers to live on it (the Ulster Plantation). Both Hugh O’Neill and Rory O’Donnell (brother of Hugh O’Donnell) died in Rome and were buried there.

The Flight of the Earls is therefore important in Irish history as it marked for many the death of the old Gaelic system in Ireland.

Photo of Carrickfergus Castle by donnamarijne

The Flight of the Earls by Bruce Gaston

← Article link: Opinion: ‘Cromwell was Framed’ | The Irish Story
Who was Felix Park? →